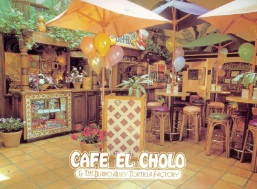 1997 an old Cadillac agency in Santa Monica on Wilshire Blvd. (that conveniently formerly housed a Mexican restaurant) became available.  We had looked at the site years before and declined, but this time it just seemed right. We opened El Cholo Santa Monica and from day one it was packed.  Over the years so many El Cholo regulars had moved to the Westside that there were more living there than in the old Western Ave. neighborhood! Of course it had a patio and TWO fireplaces.

In 1999 we entered into a partnership with John Creed, former CEO of the Chart House Restaurants.  We aimed to open a scaled down version of El Cholo in Irvine, California with the idea that it would become the first of a series.  With this location we made two mistakes. The idea of a series of El Cholos was not true to who we were and the building was in a shopping center, again, not true to our model of wanting unique character in our buildings.  Shortly into this venture, our guests were looking for a full scale El Cholo.

Also in 1999 we were introduced to Jack Croul who had just purchased the old Cannery building in Newport Beach.  This building opened as a Cannery in 1922 (around the same time El Cholo was founded) and was converted to a restaurant in 1972.  It was scheduled to be torn down in order to build condominiums, robbing Newport Beach of an iconic site and restaurant and we couldn’t let this happen.

Elizabeth Taylor became an occasional guest during this time.  While many of the famous Hollywood stars and other celebrities came frequently, our guests always showed them respect and always allowed them their space - but not with Ms. Taylor.  We had to give her a private room and escort her out safely. She was the only celebrity to be so singled out with the other exception, USC’s Heisman Trophy winning quarterback Matt Leinert.

If there is one food item that is most associated with El Cholo it is most likely our Green Corn tamales.  Available only in the summertime, when fresh corn is at its best. We had bought fresh corn for the husks and then, by hand, carefully cut the kernels off the cob.  For some reason this task had always been done by women. Perhaps they were more skilled on this basic kitchen skill as the possibility of cutting your hand was always possible.  It required a lot of labor time and even then the exact separating of the kernels were never perfect. In 1998, I was shopping in a supermarket and a can of Del Monte corn kernels caught my eye.  After 75 years the idea suddenly occurred to me that Del Monte didn’t have hundreds of employees separating the corn...they must have a machine! Investigation revealed the existence of a used one in San Jose.  I flew up and purchased it. This machine saved many hours of labor, cut hands and a better uses of the women corn cutters.

The 90’s were especially marred by the destructive Rodney King riots.  A curfew was placed in the city and all businesses closed. The looting and burning that started at 111th and Normandie spread north, burning everything in its wake until it reached Pico Blvd.   Miraculously, the riots jumped to Olympic (to the north of Western Ave) and El Cholo was spared! I spent every day in our parking lot, not knowing what (if anything) I could do if El Cholo was attacked on.  I would go home at night hoping we were still there in the morning.

One of my happiest days was the day we were able to reopen after the LA riots.  Looking around the dining room seeing guests from all walks of life joyfully dining together is something I’ll never forget.