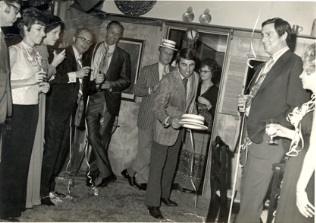 The 60’s started bringing some changes.  Frozen food started to become a factor in supermarkets and Swansons TV dinners led the way.  Not to be left behind, we started making two varieties: two small enchiladas with rice and beans, and a plate with two cheese enchiladas.  At this time we were still closed on Mondays so we worked all day assembling them and took them to a large freezer warehouse for freezing. We fought for about four years to get these meals into the larger market chains with very little luck.  Our small distributor was suddenly killed in a freeway accident which thus became the final straw to our frozen TV dinner dreams and we closed up the frozen meal shop.

In 1962 the first El Cholo (since 1927) opened as a 800 square foot shop in a small strip center in La Habra named Chantry Square.  Originally it was opened as a take out restaurant, however; when the clothing store next door went out of business we rented it. We opened a door in between the two and created a dining room equipped with 7 redwood picnic tables and some lamps we purchased in Tijuana.

Business grew rapidly so when a restaurant site in an old California ranch style building became available, we moved them there.  This set the style for El Cholo’s… a unique one-of-a-kind building (except one in Irvine). We decided: a restaurant would only be built when a building with character presented itself.  Lacking the needed funds for several years, the tables used in La Habra were the maple New England style ones we inherited from the Original La Habra Inn. In the years to follow, four major remodels and additions were added to the present the current La Habra site that stands today.

Back to the Original location on Western. A small service bar was added after an alcohol license was purchased for the first time.  The legendary El Cholo margarita was started. Prior to then, only beer and wine was served (except of course NOT during prohibition).   The wine list was simply Italian Swiss Colony Claret and Sauterne.  We also had a port and sherry served in a fruit juice glass.

At first, our margarita was created out of a standard recipe that came from a manual and, admittingly, was nothing more than average.  One night, a gentleman by the name of Emil Smith, who dined with us frequently (and always by himself) said the margarita could be much better.  He volunteered to show us how to make one.  The very next day I went out to his steak house/bar in Fullerton and was shown how to make a margarita.  This became a legendary day for me as this is now the recipe we still use today. The only thing missing ... using the most expensive tequila available at the time: Jose Cuervo 1800!  My father George always preached that we should use the best product whenever possible and to price the item fairly.  El Cholo ultimately became the world’s largest user of 1800.

1969 brought further physical changes to the Western location.  Using half of the parking lot to the North, a new kitchen was added along with a bar and lounge.  The dining room also increased in size.

A close family to mine was the Love family.  They were a very good looking family (both parents and children) and they all seemed to be headed for great lives.  So one lunch I was very disturbed when one of the Love sons, Michael, had just paid his bill at the register (as guests did in those days).  I overheard him telling a friend that he ran into that he had just formed a musical group with his cousins. Needless to say I was deeply disappointed to hear that this promising young man was going to pursue this ‘disappointing’ career in MUSIC.  I'll never forget when he said that his band was going to be called The Beach Boys...