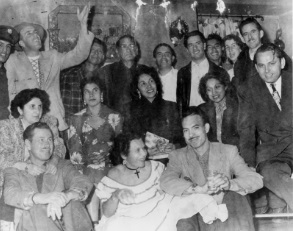 I remember El Cholo very fondly during this time. I graduated from BYU in 1954. I started to co-manage with my uncle Jimmy Salisbury while my Dad and Mom moved to Northern California and bought a home at Clear Lake.

El Cholo had yet to install air conditioning, and had vinyl linoleum floors that required waxing weekly. In 1952 we had our 25th anniversary (in Los Angeles that was a big deal at the time) and the next year my Dad had added a waiting room on the front that extended all the way to the front sidewalk.  This gave our guests (who had to formerly lined up down the block) a nice lounge to sit in with two new small restrooms.  The women’s restroom was especially appreciated as it replaced the old one which was the original bathroom for the house we took over and contained a bathtub (which needless to say, puzzled some guests).

This was also the era of budding actors. Much is made about Jack Nicholson but a friend of his, Will Hutchins gained fame first starring in a major TV series Sugarfoot in 1957. Monte Hellman who gained a degree of respect and notoriety as a producer/director was also a part of the group thart would come to El Cholo regularly.

It was still a time were everyone had a cup of coffee and a cigarette at the end of each meal.  The great array of pictures on the walls had not started quite yet but eventually the pictures came out of a recognized need to share our story.  Our story was simply family, the interesting guests that dined with us and incorporating our growing history with that of our great city’s which was growing at the time.  Wednesday nights we would be packed with USC students eager for that large plate of Mexican food for only $1.  One student in particular stood out - his name was Tom. He was not the self confident fraternity guy, rather he would shuffle in to the restaurant with no shoes, and would have to constantly be reminded to get his shoes on.

Upon graduation (I often wondered at times if he ever would graduate) he moved to Hawaii and became a surfer.  One day Tom sent me a letter asking advice on how to convert a little beach shack to a very humble Mexican restaurant.  I wrote back, heard nothing more and just assumed Tom’s restaurant dreams never came to fruition.  Years later I was walking through Corona Del Mar and a massive display of boogie boards filled the front window. It was Tom Morey’s (our no shoes wearing Tom's) Boogie Board - which had revolutionized the surfing industry.