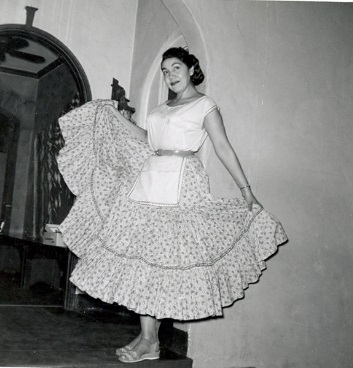 The 1940’s was a difficult time. It started with World War II and first came rationing. To be “fair” to all of the restaurants around, we were allocated the exact same amounts of meat, dairy, cheese, produce etc. The problem with this was that the needs were all different. El Cholo’ s prime need was cheese, not beef, and the rations were impossible to allocate for each individual need.

My Dad, refusing to compromise quality, and also forbidding reorganization of the successful menu, choose to simply close the door. We placed an ad in the LA Times that said “closing temporarily, see you soon”.  Shortly after, my dad was drafted to the military and became a cook in the army.  The housing shortage became real, so the family of one of my best friends, Bill Clark, ended up renting and living in El Cholo for the duration.

When we reopened in 1946 my parents were concerned about business.  All of our employees were back and, upon opening, we had lines down the block from the first day.  My Dad, who never truly loved the restaurant industry, wanted to open another type of business. My Mom, however; was El Cholo’s #1 fan and as long as she was alive she would hear none of it - so we reopened our doors.

This time, in the mid-1940’s, instead of male servers, it was all females. They all loved to sew and they created beautiful authentic Mexican dresses that they wore while serving their tables.  These dresses are remembered fondly by many.

We had 4 cooks, 2 dishwashers, 1 busser, 5 servers and 1 hostess.  Everyone worked 6 days straight and we stayed closed on Monday. Each server had the same room to serve every night.

We had one male server left over from before the War, Ray Ramirez. He worked at Lockheed Aviation during the day, moonlighting with us. Ray was a very good looking guy and the female guests were always giving him their phone numbers. Ray was a sort of hero to me. He would go out drinking and then go fly his small airplane. We had Nacho, the dishwasher, who made $60 per week and never missed a day of work. I remember Nacho would drink from some of the unfinished beer glasses that came back to the kitchen. He saved all of his money and owned seven rental homes when he retired from El Cholo.