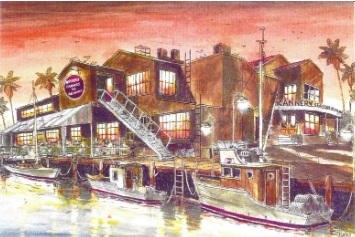 After literally a handshake deal and with extremely generous help from Jack Croul (along with changing architects and plans after 11 months into the project) the Cannery Seafood of the Pacific opened in 2002.  Initially, there was not a lot of interest in taking on this new and very unusual project. It quickly became something very, very special to everyone in the family.  We converted a rundown old two story seafood restaurant into a bar and sushi establishment with sushi upstairs and a white tablecloth bar and restaurant downstairs. Along with a beautiful patio on the bay and a 225 foot dock so guests could come by boat to dinner.  This helped the location resume being a landmark destination.

Sadly in 2006, we were forced to close Sonora Cafe.   The landlord wanted to quadruple our rent making it impossible to stay open.  The building laid dormant for 9 years!