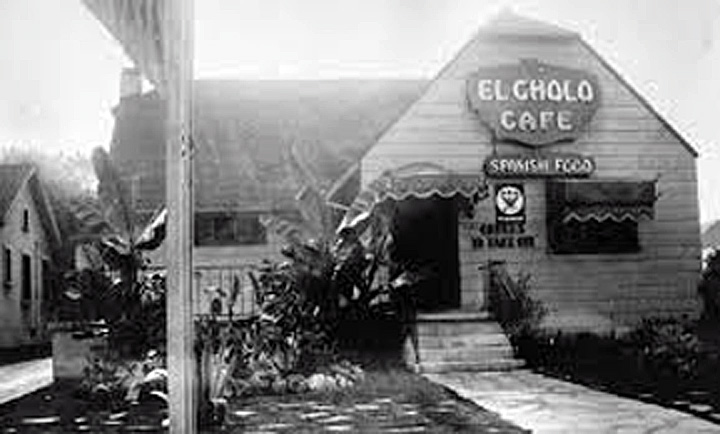 In 1931 a California bungalow house across Western Avenue at 1121 became available.  Against the advice of almost everyone, my Dad bought it and moved his El Cholo there. That was a big time move at the time and that story, more than any other, has been an inspiration.  It has taught me to always be looking ahead to get better and to never doubt yourself.

The living room, dining room and the 2 bedrooms of the bungalow became the dining rooms and the kitchen was obviously the new kitchen. As a result there was no where for people to wait so they constantly formed a line down walkway while waiting for their table and it would turn along the sidewalk on Western. This ended up being the best advertising ever. With growth on his mind, dad purchased the vacant lot next door for $2500, putting gravel over it for a parking lot. The only problem was that it was so narrow that anyone entering had to wait for someone to pull out onto Western before they could pull in. On occasion Perez Prado, also known as the “mambo king” would pull his Cadillac convertible and park it in the middle of the lot. Then no one could pull in or out.  Perez stood about 5’2” and always has very statuesque Latin women with him.

Western Avenue derived its name as it was the western boundary of the city of Los Angeles. Now a days it is almost considered downtown. Downtown also contained ALL of the retail stores. Shopping always meant going "downtown" and I remember the first “shopping mall” not downtown... it was revolutionary.  The 10th Olympic Games also came to Los Angeles in 1932. Tenth Street, which was a block north, was renamed Olympic Blvd. in its honor.  From what I remember, crime, homelessness and so many current problems we face today barely existed at that time.  It was in the new El Cholo location bungalow that a friend of my Dad’s (who worked at Weber Showcase) designed and constructed the famous high back wooden oak booths.  These have became part of our trademark.

In these days restaurant equipment companies did not exist so my Dad became an inventor.  He invented a cheese melting oven far superior to any made today and he lined it with bricks causing it to also take on some of the benefits of an actual oven. A new company at the time, Hobart Equipment, invited my Dad down to see if their new chopping machine had any benefits for him. We would constantly (and laboriously) cut onions by hand and my dad found the machine was a god send.

We had four male waiters at this time. They would come to the dining room with a full tray of hot food in each hand. They would bus their own tables, wax the floors, cleaned the rest rooms, cut the butter in pats and chopped ice for drinking glasses from big blocks of ice that the ice man delivered daily.  They did it all!